We’re Driverra, we buy exotic cars for cash. If you want to sell my Land Rover, we can give you a quick cash offer online right now.

Get Your No-Hassle Cash Offer for Your Land Rover Now

There are numerous reasons as to why you would want to sell your Land Rover to cash buyers. For one, you can probably get more for your vehicle than if you were trying to sell it privately. Cash buyers will also likely offer a better price than you would get at a dealership or through an online auction site like eBay Motors. It’s easiest to go straight to a cash buyer who will buy your Land Rover right now for top dollar. 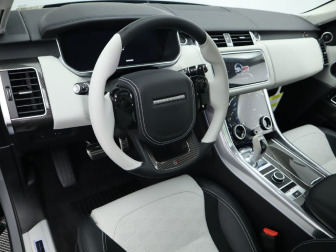 We Buy all Land Rover Models Including

Land Rovers, perhaps more than any other exotic brand, is associated with elegance and performance. When it’s time to sell your Land Rover, the resale value should reflect this.

How Much Will I Get for My Vehicle?

For anybody selling their automobile, this is the first question they’ll ask. The amount of money that your vehicle will go for depends on the condition of what you’re selling. If you have a new car that’s only been driven for six months, then chances are it will go for more than if it was a ten-year-old vehicle.

Here are two steps to calculate your car’s resale value:

What Are the Benefits of Selling to a Cash Buyer?

You’ve been hitting the road and have already made a cross-country trip with your one-of-a-kind automobile, but now you’re ready to move on.

You may end up realizing that selling your Land Rover is a time-consuming and stressful process. Here are the benefits of selling your precious exotic car to a cash buyer.

The majority of individuals would rather target potential purchasers than negotiate with a dealer. Private party transactions aren’t as straightforward as they appear. Think about everything you might get from this approach and consider whether or not it’s worth giving up your vehicle to a professional buyer.

How Do I Know if a Seller Is Legit or Not?

If you’re selling to a business that buys in cash, there’s less need to worry about whether they are legit. Cash Land Rover buyers also have accredited enterprises, so you can be sure that they meet the standards and requirements of every company out there.

How the Process Works

If you’re trying to ‘sell my Land Rover‘, going the traditional route isn’t ideal. The problem is that putting your Land Rover V10 on the market might draw more thrillseekers more interested in a hassle-free car ride than becoming genuine buyers. Your neighbors would be ecstatic to get their hands on a Land Rover.

The truth is that there aren’t many people out there who can afford to make such a huge investment. Sure, you could put your Land Rover up for sale at the local dealership, but you’ll probably receive a low-ball trade-in offer.

They understand the market better than anyone and know that while your Land Rover may draw attention in their showroom, it won’t go anywhere for a long time. Whether they’re unaware of the value of your Land Rover or simply unwilling to take a chance selling it themselves, their offer will be nowhere near what you want.

If you’re considering selling your Land Rover to cash Land Rover buyers, you may consider the benefits of working with us. We pay fast, making it easy for you by going to your area. Contact one of our experts today if you need more information about how we work or want an estimate on your car. You can request a consultation here. We will get back to you as soon as possible.

The Land Rover: A Vehicle For the Ages

Range Rovers: The Inside Scope
Perhaps one of the most recognizable luxury SUV’s on the market today is the Range Rover. The brand is the featured line from the British car manufacturer, Land Rover.

Range Rover’s story started in 1970 and has become Land Rover’s featured model for its 50 year history. This history includes four generations of the vehicle along with several other models. Discerning fans of the Range Rover can also choose from the HSE models, which stand for high standard equipment. These HSE’s come with enhanced trim level, interiors, and other upgraded features.

From 1970 to 1996, Range Rovers were produced for the utilitarian driver. These vehicles were geared towards off-road drivers that needed the ability to hose down the interior. Features like power steering, leather seats, cruise control, and air conditioning were not included in the early generations of the Range.

In 2002, the third generation of Range Rovers were released under BMW ownership of the company. Models introduced in this period included components found the BMW 7 series car line, and were highly sought after models. L322s were in this generation and came with variants that included BMW transmissions along with other variants including supercharged Jaguar engines.

Range Rover is currently in its fourth generation. Over its history it has expanded to three lines of vehicles; the Sport, Velar, and Evoque. The Range Rover Sport was released in 2004 as the ultimate mid-sized luxury SUV. Its body style relied heavily on design of the Land Rover Discovery. Velars were released as a mid-sized crossover in 2007 which include Jaguar S-Pace platforms. The Evoque was released as a 3-door or 5-door hatchback with front wheel or all wheel drive editions. Range Rover Velars have consistently been named truck, car, and SUV of the year by various outlets.

With new models of Range Rovers including high end features like premium audio systems, satellite radio, and evolving design, the outlook looks very bright for the line of vehicles. As the market continues to demand luxury vehicles with utility, the Range Rover will be the standard choice for years to come.